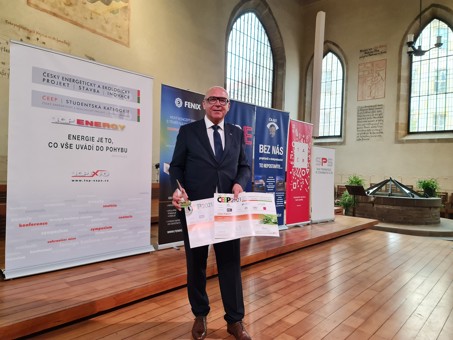 On 24th May 2022, our company received two awards as part of the ČEEP 2021 announcement ceremony, namely the PRIZE OF THE MINISTRY OF LOCAL DEVELOPMENT OF THE CZECH REPUBLIC and the PRIZE OF THE JURY.

The prizes were awarded for a project dealing with the change of the existing steam pipelines of CZT Písek to hot water pipelines and, at the same time, the modification of individual intake points – transfer units, but also the reconstruction of TH areas of important consumers (Písek Hospital, etc.). The emission load was also reduced – reconstruction of the fuel oil boiler room and use of residual heat from the biogas station.

The project territorially affected the entire city of Písek and formed the key axis of the long-term concept of systematically reducing the energy intensity of heat production and distribution in the heat supply system in Písek and the greening of heat sources. The project dealt with the change of the existing steam water distribution system of the Písek CZT to hot water, including the modification of individual sampling points – transfer units, the reconstruction of the thermal management of the Písek Hospital area, all of which brought savings in primary energy in the form of a reduction in losses in distribution systems. Part of this complex project is also the replacement of the original hot water distribution systems in the Portyč housing estate, which were in poor technical condition as a result of the flood. During the conversion of steam pipes, the network of hot pipes to new customers was significantly expanded, the hot pipe was introduced into the historic center of the city of Písek. At the same time, there was a reduction in the emission load thanks to the reconstruction of the fuel-oil boiler room for natural gas and the use of residual heat from the biogas unit. The project brings efficiency in the operation of the heat network, significantly contributes to the decarbonization of the CZT and enables the long-term functionality and reliability of the heat supply to final consumers in the city of Písek.